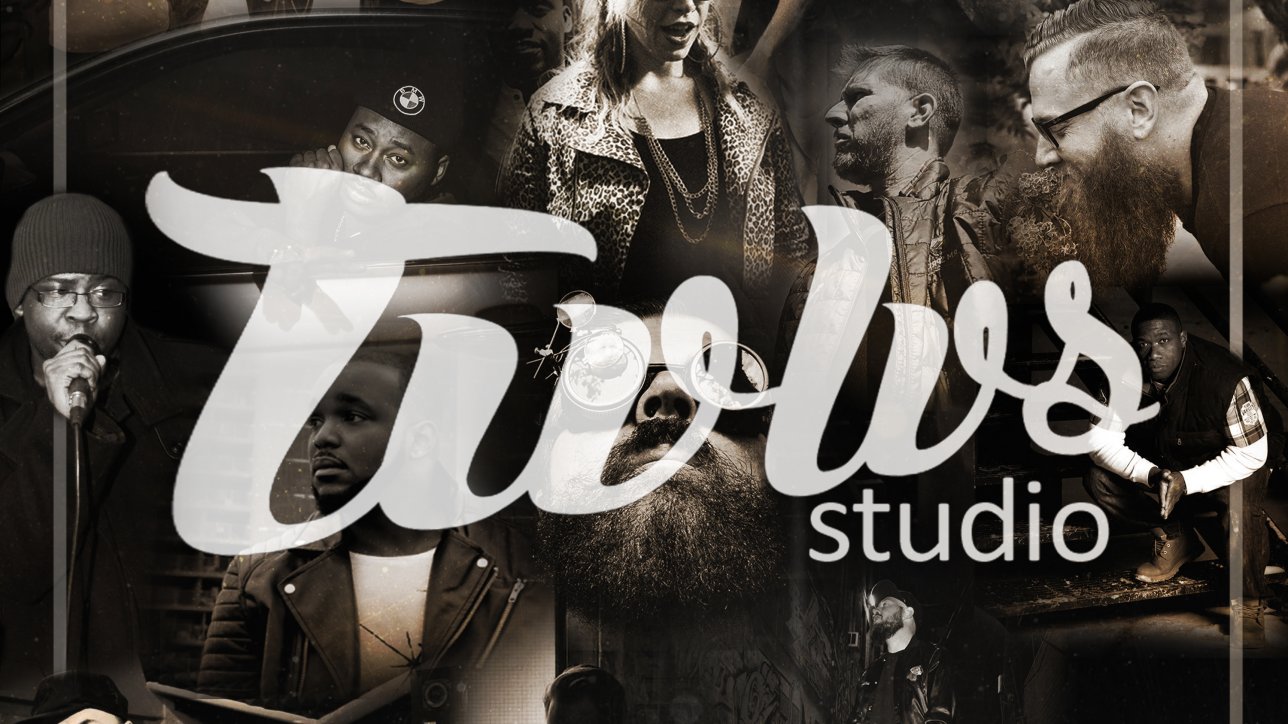 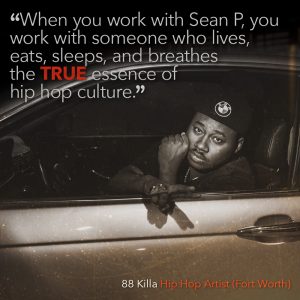 88 Killa recorded vocals for songs from his last two tapes. Here’s what he said about his experience, “When you work with Sean P, you work with someone who lives, eats, sleeps, and breathes the TRUE essence of hip hop culture.” 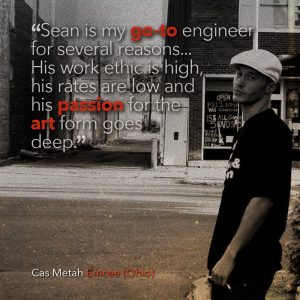 Cas is a leader in this Hip-Hop community. Bring together albums from legendary arts and underground talent across the globe. Here’s what he said about our work together, “Sean is my go-to engineer for several reasons…His work ethic is high, his rates are low and his passion for the art form goes deep.” 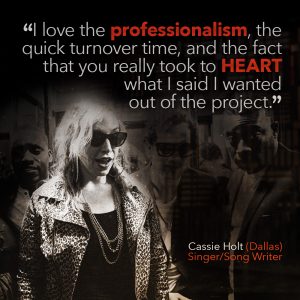 I produced on Cassie Holt’s lastest solo album “Seven” Here is what she said, “I love the professionalism, the quick turnover time, and the fact that you really took to heart what I said I wanted out of the project. Your beat actually slowed down and embodied Sloth.” 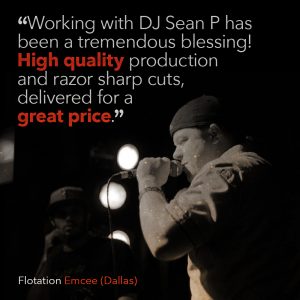 A true emcee, Flotation picked up beats and cuts for his lasted album “No Plateau” He said, “Working with DJ Sean P has been a tremendous blessing! High quality production and razor sharp cuts, delivered for a great price.” 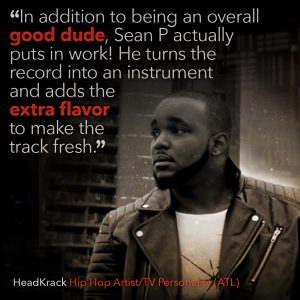 I’ve worked with Headkrack over several years now in the studio as a scrather DJ bring hooks to his songs. He said, “In addition to being an overall good dude, Sean P actually puts in work! He turns the record into an instrument and adds the extra flavor to make the track fresh.” 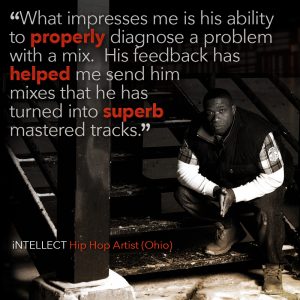 iNTELLECT and I have worked closely mastering a few projects and I’ve contributed as the sole producer to the “Roots EP”. He said, “What impresses me about DJ Sean P is his ability to properly diagnose a problem with a mix. His feedback has helped me send him mixes that he has turned into superb mastered tracks.” 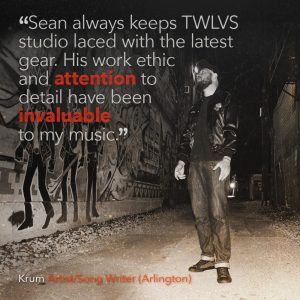 I get to perform with KRUM regularly, and we’ve covered the whole nine in #TWLVSstudio. I’ve very excited about the new music! He said, “Sean always keeps TWLVS studio laced with the latest gear. His work ethic and attention to detail have been invaluable to my music. He can’t be touched on production, mixing, mastering, cuts and engineering.” 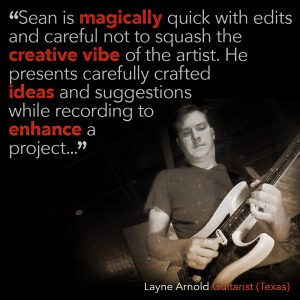 Layne Arnold is an incredibly gifted gutarist and studio musician. He’s cut fun rock and pop songs with me at #TWLVSstudio “Sean P. and TWLVS studio provide a wonderfully creative environment for recording demos, jingles, and other audio recordings. Sean is magically quick with edits and careful not to squash the creative vibe of the artist. He presents carefully crafted ideas and suggestions while recording to enhance a project, song, or album to give it lift and separate it from a tired pack of current, new releases. I’m honored to work professionally with Sean P. and TWLVS Studios as a fellow creative, musician, and producer.” 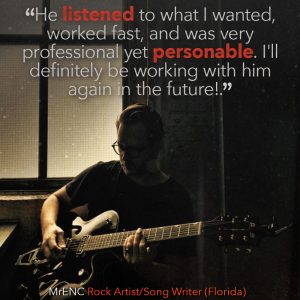 I really look up to MrENC. He’s an amazing artist! Here’s what he said when I masted a project for him, “Sean P was fantastic to work with! He listened to what I wanted, worked fast, and was very professional yet personable. I’ll definitely be working with him again in the future!” 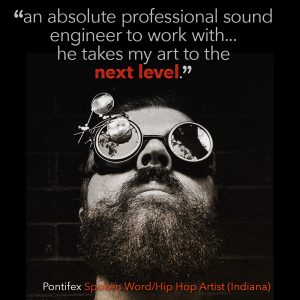 I continue to work on new music with Pontifex as a co-producer & mixer. Here’s what he had to say, “If youre looking for a reasonably priced and an absolute professional sound engineer to work with, Sean P is your man. We’ve worked together on many projects and he takes my art to the next level. Much respect.” 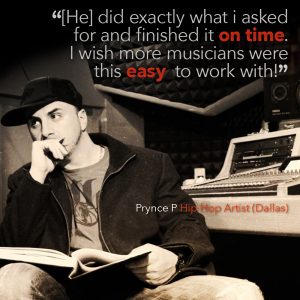 I did 2 scratch hooks on his most recent album “14” and I also made a promotion DJ mix of the whole project. Here’s what Payam Abbasi “Prynce P” said, “DJ Sean P did exactly what i asked for and finished it on time. I wish more musicians were this easy to work with!” 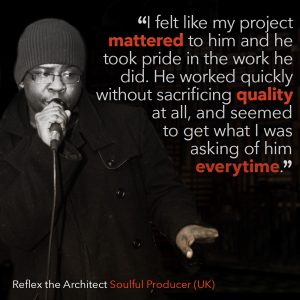 I mastered his lastest album in 2016. Here’s what ReFlex the Architect said, “Getting Sean Patrick to master my album was probably one of the easiest parts of my project. I knew the quality would be guaranteed from the work he had done for my crew (Scribbling Idiots) previously, but his work ethic and customer service especially stood out to me. I felt like my project mattered to him and that he took pride in the work he did. He worked quickly without sacrificing quality at all, and seemed to get what I was asking of him everytime. Really happy with the masters and will definitely work with him again.” 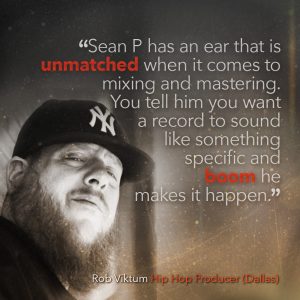 Rob Viktum is a heavy weight hip hop producer! He’s currently working on his mangum opus and here’s what he said about our work together, “Sean P has an ear that is unmatched when it comes to mixing and mastering. You tell him you want a record to sound like something specific and boom he makes it happen.” 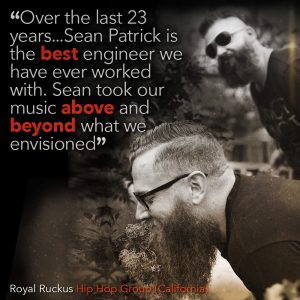 Royal Ruckus traved to spend a week with me to record a double album the summer of 2016. We did an ungodly amount of work in record time! Here’s what they said, “Having been in and out of recording studios over the last 23 years, I can honestly say that Sean Patrick is the best engineer we have ever worked with. With the expertise of an engineer, the insight of a seasoned producer, and a state-of-the-art studio set-up, Sean took our music above and beyond what we envisioned to a level of professionalism beyond our imagination. On top of that, he’s just a really great guy to work with. I cannot recommend him and his studio highly enough.” 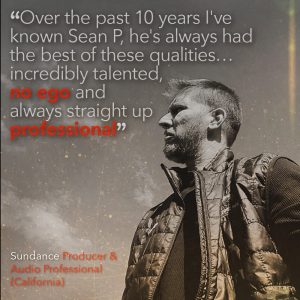 A guy I look up to as a musician, producer & audio engineer, Ryan Göllner “Sundance” said some kind things about our work together over the years, “Stay in the music business long enough and you’ll end up working with every level of talent, ego and professionalism. Over the past 10 years I’ve known Sean P, he’s always had the best of these qualities… incredibly talented, no ego, and always straight up professional.” 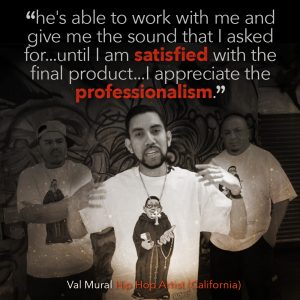 My dude Val Mural is an ill emcee from Cali. I’ve had the pleasure to mix & master for him over the years. He said, “One of the things I truly value from working together with Sean P is that he’s able to work with me and give me the sound that I asked for he works with me and asks me exactly what it is that I want until I am satisfied with the final product I also appreciate the professionalism and the punctuality.”
88 Killa, Cas Metah, Cassie Holt, DJ Sean P, Fort Worth, headkrack, Hip Hop, home recording, intellect, Krum, layne arnold, mr enc, Music, pontifex, pop, Prynce P, Recording, recording studio, reflex the architect, rob viktum, royal ruckus, soul, sundance, Texas, Twlvs Studio, val mural, Vocal Recording